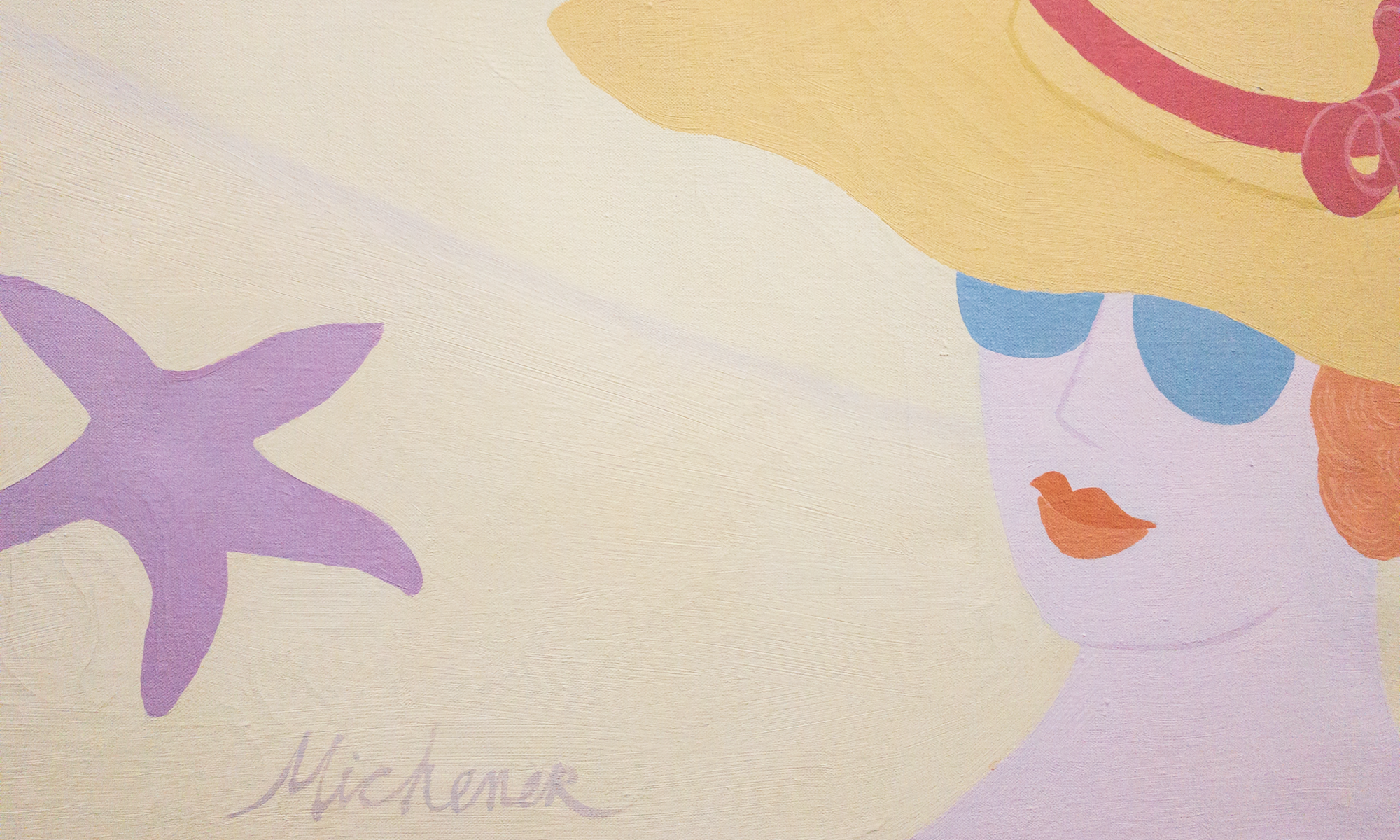 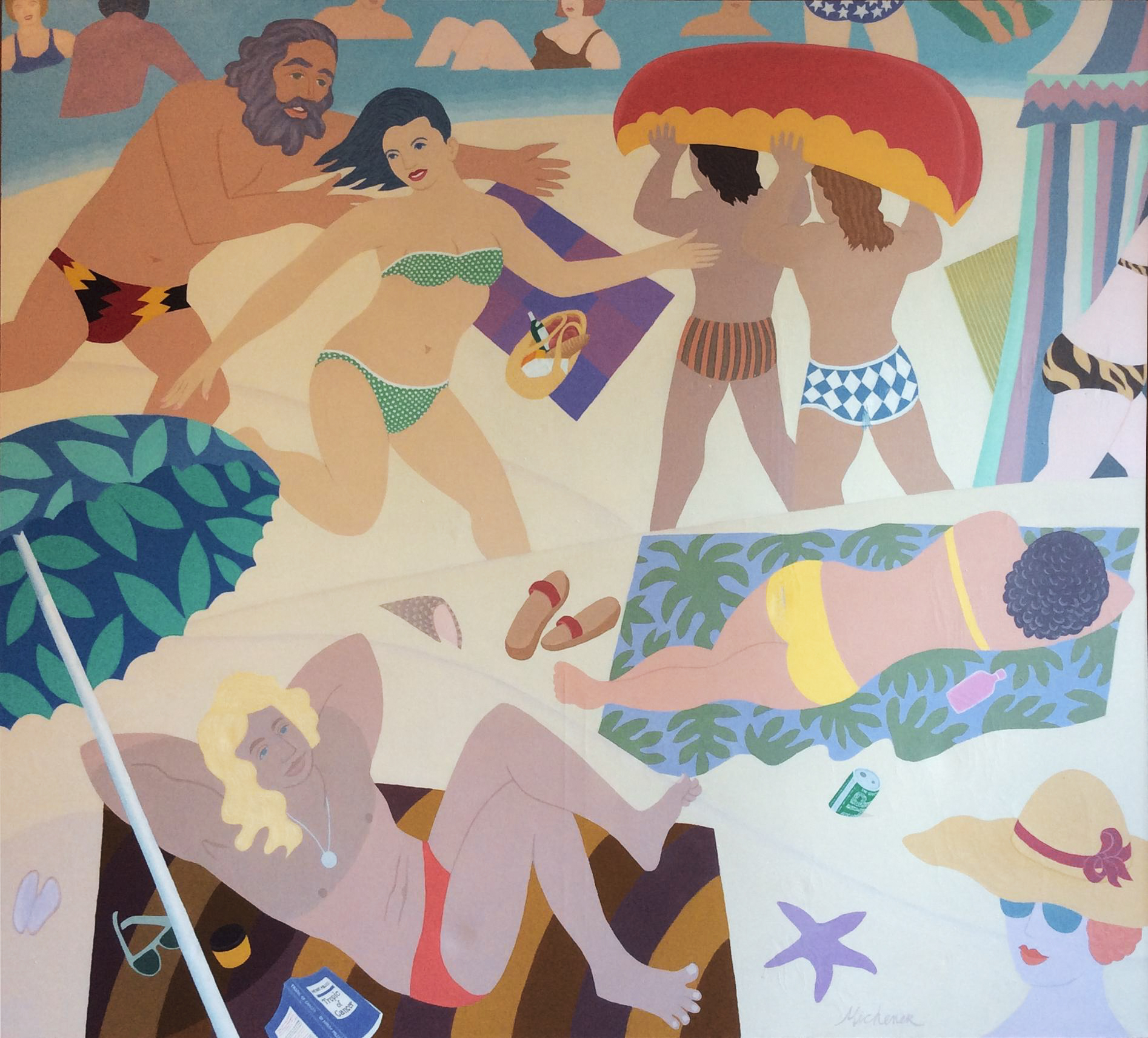 Robert Michener, The Good Old Days Were Never Like This, 1976, oil on linen. SFU Art Collection. Gift of the artist, 2000. Photo: SFU Galleries

Most memories I have of MPub are fond: late nights in the project rooms, debating typefaces while drinking smuggled wine out of plastic goblets, sharing snacks over the transom of the unfinished divider walls. But one in particular has both haunted and perplexed me: The Painting. If you did the program in the last twenty years, you know which one I mean.

A silver-haired character (Triton? Poseidon? Zeus himself?) in a colourful Speedo runs after a bikinied woman across a beach, his arms outstretched as if to capture her. The woman looks back at him, her hair windswept around a playful expression masking, I imagine, sheer terror. Another man in the foreground in repose underneath an umbrella, his reading material— a copy of Henry Miller’s Tropic of Cancer—cast aside so he can leer at the woman walking past in a hat and sunglasses (perhaps her attempt to enjoy the beach unmolested). Signs of decadence—animal-print swimwear, wine, a baguette—dot the shore. Two figures hoist a canoe above their heads, off to sea to escape all of this. A range of skin tones are on display, but it’s unclear if this is diversity or just a bunch of white people who like to tan.

What does it all mean? I’m no art historian—I’m still working in book publishing, ten years after the program—but this kitschy tableau, juxtaposed with the work’s title, The Good Old Days Were Never Like This, suggests a false nostalgia for a time that never really existed. If it’s intended as a riff on the saying, “The good old days were never really that good,” are the painting’s forced perspectives a reminder that the male gaze is an equally forced cultural perspective? I wonder.

What intrigues me most, though, is how the painting found its way to the third floor of Harbour Centre in the first place. Who decided it should hang in the north student lounge populated mostly by MPub students, serving as the backdrop for many a group photo or as a conversation starter at the many receptions held in that space? (The plaque states that it was donated to the SFU Art Collection in 2000 by the artist, Robert Michener. SFU Galleries tells me no one on staff was around when the painting was donated, so I guess we’ll have to let the mystery be.) Still, it leaves me wondering: is its location a coded message intended for the program’s aspiring publishers? “Treasure your salad days, with your made-up P&Ls and your PubFight, before you’re publishing for keeps”? Patronizing. “Uphold the freedom to read at all costs, as Grove Press did through the Miller obscenity trials”? That’s a bit of a stretch. “Keep your eye on the prize”? Gross.

And when the painting was relocated from the lounge where it loomed large in the MPub imagination to a more neutral space next to the elevators in 2018, what did that say about the state of publishing and campus culture? Did someone decide enough was enough – that the largely women-dominated cohorts didn’t need to be bear witness to a #MeToo moment in the making while they were just trying to learn about Canadian cultural policy or code some CSS?

One of my MPub colleagues remarked recently that she thought of the male pursuer as her project report, prodding her to get it done. Another commented that the image would make for a good “tag yourself” meme. (I’m the starfish.) But maybe a friend/alum/former third floor employee, put it best: “I’ve always disregarded this painting, but I’ve never not noticed it.”

She’s right: it’s the most forgettable yet indelible piece of corporate art I’ve ever encountered. I hope The Painting lives within range of the Publishing offices for at least another twenty-five years, when books are files beamed into our brains. And I hope it becomes a pentimento, its casual summer misogyny gradually overwritten by accomplishments of future cohorts—students who I have faith will build a more equitable publishing industry.